There are some things in football you never expect to see. England winning a major championship, Jonathan Stead scoring a goal or Gary Neville standing on the Kop to take in a Liverpool game during a Saturday afternoon off, for example. You could add to that list Thierry Henry celebrating victory in a Spurs shirt except that one has actually happened – well, sort of. Henry has been in the USA cheering on compatriot Tony Parker in the NBA finals. Here he is with Parker decked out in his San Antonio Spurs kit. 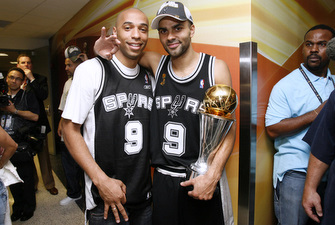