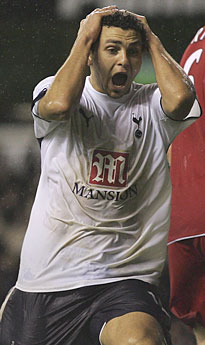 Now this is one piece of transfer news that has left my jaw dropping in a most unattractive manner. Okay, so at Birmingham City the limited coffers reduce your targets more than those of the Premiershipâ€™s heavy-hitters. Yes, Birmingham is not the most glamourous or alluring place for foreign imports keen to move to the UK, and Steve Bruceâ€™s managerial track record might not include many impressive trophies, but Â£3 million on Hossam Ghaly? Someone please explain this one to me.
The former Spurs player has moved to the Midlands on a 3 year deal with an option for a further 2 years. Bruce is trotting out the usual welcoming gibberish: “The signing of Hossam is an excellent acquisition. With the loss of Stephen Clemence, he will play a vital role in the middle of the park for us this season. I was always very impressed with him whenever I watched him play for Spurs last seasonâ€ (did he watch a different player to the rest of us, or is constantly giving the ball away the new tactic at Birmingham?)

â€œHe has all the credentials we are looking for in a player, he is only 25, a very talented international who still has the hunger to succeed in the Premiership. As well as being technically gifted, Hossam can also stand up to the physical side of the game so he will give us that extra edge in midfield. We are delighted to have him on board.” Surely times at St Andrews arenâ€™t that desperate yet? At least wait until the relegation fight until you spend silly money on panic buys.