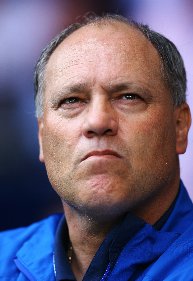 Poor old Martin Jol. A defeat to Arsenal sees his job (allegedly) dangling by a spindly thread. A poor start to the season and a battered Spurs cheque book has seen the big Dutchman coming under severe scrutiny from certain quarters. Even though there is no better option for Tottenham at the moment and Jol clearly doesn’t deserve the boot, it looks like his days could be numbered… and I love it.
Now, before you think I’m some gloating Gooner, think again. I’m a Bolton fan. If Spurs fans are worrying about their season, try a mile in my shoes. Tottenham have a manager who is able to dig them out of a rut. My beloved Trotters seemingly have a manager in Sammy Lee who couldn’t fight his way out of a paper bag (I’d love to be proven wrong). So, if Jol is looking like he’s dole bound… cough cough… are you listening Phil Gartside?