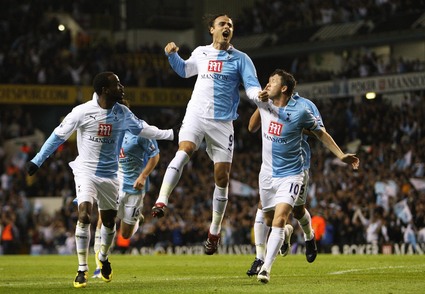 Wow, what a pulsating game to mark Spurs’ 125th anniversary! At 4-1 down, Martin Jol looked like a dead man walking, but Spurs roared back to snatch an unlikely draw â€“ that no doubt felt to Spurs fans more like a win â€“ with a Younes Kaboul goal in added time. This photo (Getty Images) shows Dimitar Berbatov celebrating his goal, Spurs’ first of the night.
‘It was a relief in the end. I don’t even want to think about if we had lost,’ Jol said.
More Tottenham chat at Spurs Pies