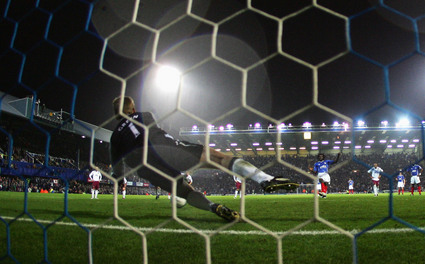 HEROES
Rob Green Saved a last-gasp penalty (pictured) to snatch a point for West Ham at Pompey. Surely Green now has to be taken seriously for England’s No.1 shirt instead of Paul Robinson?
Cesc Fabregas Showed off the full extent of his freakish maturity and talent with a wonderfully authoritative performance at Anfield. Stevie G loves him; so do we.
Avram Grant Chelsea in ‘entertaining to watch’ shock. Grant has done better than any Chelsea fan might have expected. Jose who?
VILLAINS
Daniel Levy In the eyes of many Spurs fans, Levy is the real villain at the Lane. He was booed again on Sunday, as Spurs crashed to another home defeat, 2-1 against Blackburn.
Bolton fans A crowd of just 18,413 to watch your new manager’s first game in charge? At least give Gary Megson a chance.
Benjani Mwaruwari Missed the penalty that would have given Portsmouth victory at home to West Ham. Pompey boss Harry Redknapp was not a happy bunny. He said: ‘Benjani worked hard for the team but he certainly won’t be taking any more penalties.’