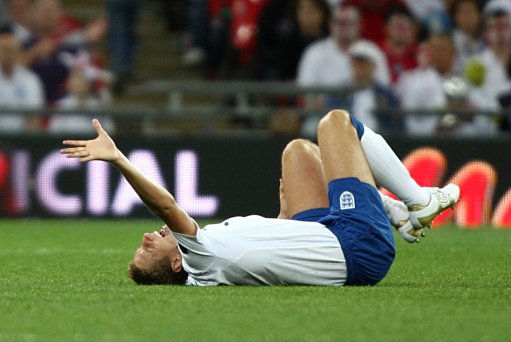 Tottenham centre-back Michael Dawson will be sidelined for up to two months after suffering a grotesque-looking ‘ostrich knee’ during England’s win over Bulgaria on Friday evening.

A fairly innocuous challenge resulted in Dawson’s knee twisting awkwardly as he fell, and a statement on Spurs’ official website confirmed that the 26-year-old has indeed sprained ligaments in his left knee as well as rupturing a ligament in his left ankle. The official word is that he will be crocked for ‘between 6 and 8 weeks’.

There were fears that the injury was much more serious, with people beginning to bandy the dreaded ‘c’ word around…cruciate, but his manager Harry Redknapp has spoken of his relief that Dawson’s injury is not as bad as he first feared;

“First of all, it’s a big blow for Michael and a great shame for him. To be honest, watching it live, I thought it could have been worse than it’s turned out. It could have been his cruciate ligament and that would have been the end of the season for him but as it is, it’s not such a long job and he should be back in a couple of months.”