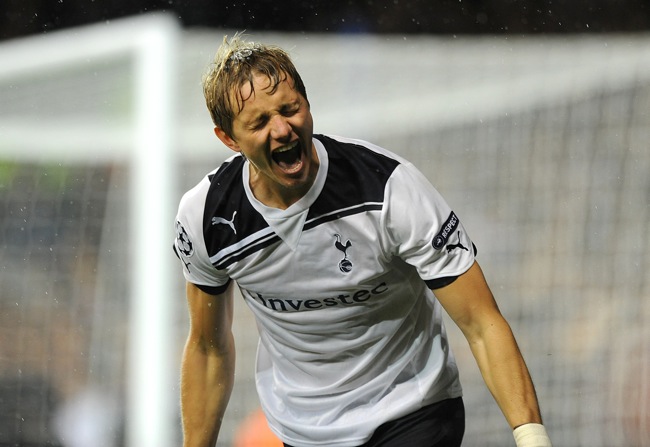 Pav stubs his toe. Or scores a penalty

Wow, that was some ride. Through curtains of rain in north London, you could make out one world-class footballer, struggling to get his colleagues to sing from the same team sheet: Rafael van der Vaart may be a classic ‘Look at me!’ drama queen but boy, he’s fun to watch. Or he was until he saw red – rightly so – for a couple of clumsy challenges. Still, in the time he was on the pitch he did it all: ran his socks off, tackled worse than Paul Scholes, shot from everywhere, had a penalty saved, scored with a fierce finish, and generally gave a command performance worthy of any diva.

Not that Spurs missed VdV much, thanks partly to a couple of dubious penalty decisions by the ref, which Roman Pavlyuchenko converted with cool aplomb. The ref also missed a flailing, malicious elbow by Tom Huddlestone, for which the midfielder should have walked.

Gareth Bale also gets an honourable mention, not only for his superb finish for Tottenham’s final goal, but also for his incredible ‘engine’. He must have three or four lungs, so freakish is his stamina.

Overall, it was a cracking home bow for the Lilywhites in the CL. Spurs may be many things, but dull is not one of them. And props to Twente, who played their part and were certainly not flattered by the scoreline. They’re easily as good as Werder Bremen, on this evidence at least, as well as judged on their 2-2 draw against champs Inter.

The best pics from the Lane below. Click to enlarge the thumbs: