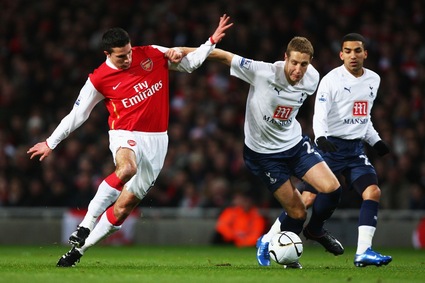 Firstly, this was a game Tottenham should have won. They were the better team last night, but we shouldn’t forget that Arsene Wenger fielded a virtual ‘B’ team, where Spurs started with a stronger, more experienced team.
Most Arsenal fans who saw the game, either on Sky or at the Emirates, will surely concede that they were lucky to escape with a draw. Spurs have had no luck against their north London nemesis for so long now, and there was a big portion of luck about Theo Walcott’s equaliser, which rebounced off his arm and bobbled, almost apologetically, past Radek Cerny.
Still, there is a crumb of comfort for Spurs fans â€“ the second leg is at White Hart Lane and they are now slight favourites to go through, as long as Wenger doesn’t suddenly pull his first XI out of the bag at the last minute.