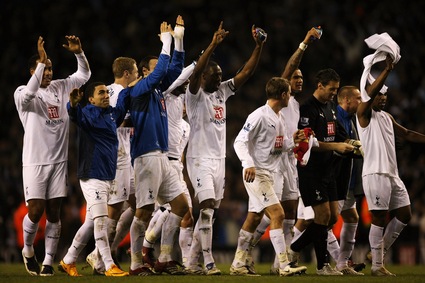 First up, some reaction from the big Arsenal blogsâ€¦
‘[Spurs] obviously had the momentum and once thatâ€™s going itâ€™s hard to turn it around. Theyâ€™re still an awful bunch of cockfisters though, singing that song about Arsene and throwing stuff at Cesc as he tried to take a corner. No amount of goals wins you any amount of class.’ Arseblog
‘Letâ€™s not pretend that whilst Tottenham were the better side, that they in any way, shape, or form are the better sideâ€¦ Letâ€™s not pretend that a side containing the likes of Almunia, Toure, Clichy, Flamini, and Adebayor from the start wouldnâ€™t have taught Spurs yet another footballing lesson theyâ€™d long to forgetâ€¦ And letâ€™s not pretend that the League Cup matters all that much to us.’ Gunnerblog

‘The real difference here was that the Spuds wanted it. Their players wanted it and their fans wanted it. They wanted it desperately. And the Arsenal players just did not – not until it was far too late.’ East Lower
More reaction, including from Tottenham’s side of north London, after the clickâ€¦

‘Itâ€™s a shame that the class exhibited on the pitch by the hosts did not extend to the pond life in the stands. The vile abuse directed at Arsene Wenger is over and above what constitutes banter. The missiles directed at Cesc Fabregas said everything about large numbers of those who watch their football in the marshlandsâ€¦ The silent majority at Tottenham deserve better. Football deserves better.’ Goonerholic
‘Blimey they have been crawling out of the woodwork this morning! My phone hasn’t been this busy since I jokingly told someone I had a spare Champs League final ticket. Judging by the number of texts, calls and ferking Skypes you would have thought there had been a seismic shift in the fortunes of North London football clubs.
‘But Sperz boys and girls it is time to get real. You beat a largely second string, injury ravaged team in a cup competition that is fourth on Arsene’s radar. Last time I looked we were still in the running for the Premiership, Champs League, FA Cup. How about you?’ Arsenal Pies

‘In many respects it was â€˜one of those nightsâ€™; Spurs had six shots on goal, scored five and hit the post, the sort of return that happens once a season. Yet they merited the win fully. They were more effective in possession, more menacing in front of goal where it counts. Whether it is the spark to revive their season is a way off being known, they have the small matter of a visit to Old Trafford to gauge that aspect. For Arsene, there is now a quandary; what does he do about this weekendâ€™s FA Cup tie?’ A Cultured Left Foot
A mix of bitterness, anger and humility from the Arsenal blogging community. And I have to agree that a minority of brainless Spurs fans spoil it for the rest of us.
And some reaction from Spurs bloggers â€“
‘As I travel the rows and seats of my block from front to back and side to side at the will of the mob, I pass hundreds of faces of different Spurs; some old, some young, men and women, but all of them, every single one bears the expression of a Yiddo who knows that tonight is the night and that finally itâ€™s our turn to go to Wembley once more.’ The Beef Bagel
‘Arsenal will of course point to their â€œwe only fielded the kidsâ€ theory, but of course, Mr Wenger reneged somewhat upon his faith in his youngsters, by enhancing them with regular first teamers Sagna at right back, skipper Gallas next to Hoyte, Hleb on the right wing and remaining players who have all got first team experience. Then you must consider that Cesc Fabregas replaced the injured Denilson after only 18 minutesâ€¦’ Spurs Odyssey
‘Underestimating Tottenham – and Juande Ramos – was a big mistake, and it matters not whatever the Gooner fans say about “it was our kids”, “we’re not bothered about the Carling Cup”, “good win but it has been nine years”â€¦ Last night Arsenal were HUMILIATED by a Tottenham side they thought they had the measure of, with a team weakened purposely by a manager with hamfisted tactics and an over-inflated view of his strength-in-depth.’ Spurs Pies