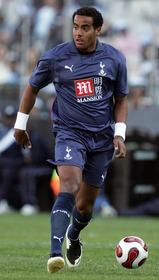 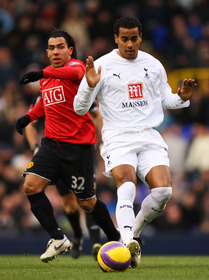 Who ate all the pies? Not Tom Huddlestone, at least not these days. The Hudd has reportedly lost a stone and a half since the arrival of Juande Ramos, a loss that you can clearly see in these two pics above. The one on the left was taken in July 2007; the one on the right, in February 2008.
The new, slimline Huddlestone has great vision and now he has the athleticism to make the most of his gifts – it’s an indictment of Martin Jol’s more relaxed management style that the young Englishman was allowed to get out of shape. Hudd 2.0 was superb against Man Utd at the weekend â€“ alongside Jermaine Jenas, he more than matched United’s midfield â€“ and must be in the thoughts of England boss Fabio Capello. Ramos has also tried him out at centre-back, and perhaps there is a future for Huddlestone in that role.