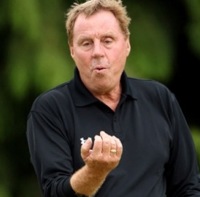 Trifficly, Tottenham gaffer Harry Redknapp has threatened the FA with a post-match media blackout if they charge him for his criticism of referee Mark Clattenburg, re: Nani’s freak goal at Old Trafford on Saturday.

According to PA, the FA is set to make a decision on Tuesday whether to analyse Redknapp’s criticism of “scandalous” Clattenburg, which included the dubious insinuation that the under-fire ref might “come up with a story that will make it all look right”.

In a press conference today, ahead of Tottenham’s crunch match vs Inter at White Hart Lane on Tuesday evening, a tetchy Redknapp said:

“If they want to make an issue of what I said then I’ll make some issues as well, don’t worry.

“Don’t expect me to come out on the TV anymore – ever – and speak to the press after a game. Otherwise, what chance have we got?

“If you want me just to come and talk rubbish and say, ‘No, it was a good decision, I’m quite happy with it’, then don’t bother to get me to come out after a game.”

Redknapp also took issue with the timing of post-match interviews for managers, saying: “We shouldn’t be dragged out onto TV two, three, four minutes after a game.

“I don’t want to go on TV; I’d much rather stay in the dressing room with the players. But when I’m asked a question, I give a truthful answer.

“He [Clattenburg] made a right mess of it all, and that was my answer. And I stand by that 100 per cent.”

Can’t wait for the FA’s next move…