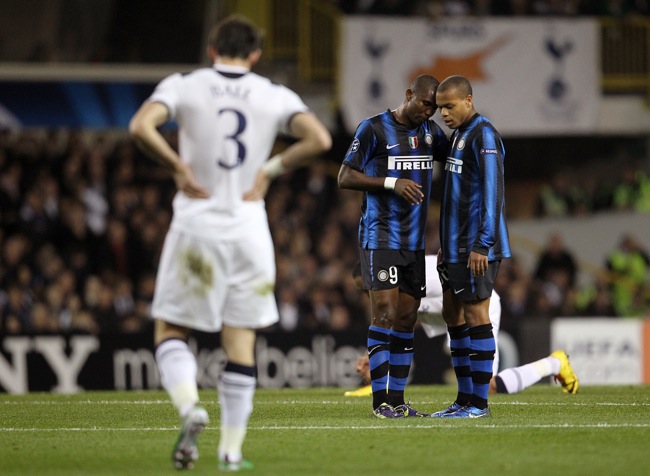 How do you solve a problem like Gareth Bale?

So did you enjoy the Gareth Bale Show Part II? I loved it.

Another barnstorming, lung-busting, holy-shit-how-is-he-still-sprinting-at-full-speed-after-85-minutes?! performance by Bale was the key to Tottenham’s fully deserved win against the reigning European champions last night. The Welshman set up two goals, added another five million to his value (I would say he’s now worth between £40-50m), knocked millions off Maicon’s value, and generally made all our jaws hit the floor. And whilst it would be wrong to pour too much hype on him (Phil Neville owned Bale not very long ago), how can you not reach for the superlatives in the face of such balls-out brilliance?

Inter ambassador Luis Figo admitted after the match to Harry Redknapp that “amazing” Bale “killed” Inter not once but twice. How true. Of course, Bale is not a one-man team, and almost every Spurs player made a telling contribution, with honourable mentions for Carlo Cudicini (what a save he made from Wesley Sneijder), Benoit Assou-Ekotto (a very underrated defender), William Gallas, Tom Huddlestone and Luka Modric.

As a Tottenham fan, I will bask in this victory for a long time. We dominated the Champions League holders and did so playing incisive, attractive, daring football.

I guess I won’t have to wait long for the commemorative DVD. Nor will Spurs have to wait long for a slew of serious offers for Bale from Europe’s big boys. The day he leaves – and he will, next season I would guess – I will make a very sad face. As I’m sure Southampton fans did when he left the Saints in 2007.

Highlights (probably won’t be around for long, thanks to the vigilant Uefa YouTube police):

You beauties. Yes, even Crouchy.