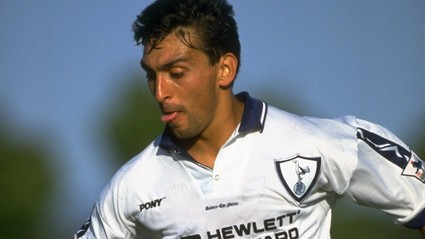 THEN: Dumitrescu arrived in the Premier League after some outstanding performances at the 1994 World Cup which saw him help Romania to the quarter-finals. Tottenham paid Â£2.6 million to bring the midfielder to England from Steaua Bucharest, where he had spent the first eight years of his professional career. The start of his career in England was overshadowed by a story in the News of the World that he had requested the services of a prostitute. He went in exile/on-loan to Sevilla after a brief but fairly successful spell for Spurs. He returned for the start of the 1995-96 season and played a handful of games before being flogged to West Ham. His Hammers career was short-lived and Dumitrescu was soon fleeing the tackling habits of Premier League defenders to continue career in Mexico with Club America.

NOW: Dumitrescu called time on his career in 1998 and set-up business as an agent. His company, Sport and Business World, which is about as successful as his career in England. The company’s website is divided into a homage to the wonders of Ilie Dumitrescu and a short portfolio of the bunch of Romanian randoms that Ilie calls clients. He has also enjoyed what can only be described as a journeyman career as a coach. He has coached a variety of lower league Romanian and Greek sides, and the Romanian under 21 team, but left his last post at Egaleo in 2006. He also owns an art gallery in Bucharest.