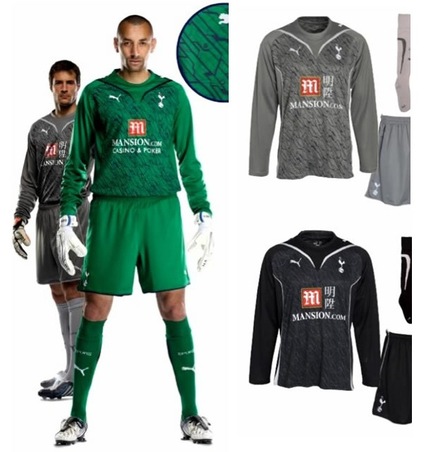 Much debate on Pies yesterday about Puma’s controversial new Spurs kits. At time of posting, more than 1,500 of you had rated the kits, with 49% voting for NASTY. Good call, people.
Football Shirt Culture has a couple of leaked images of Tottenham’s new goalkeeper kits, and they’re just as bad as the outfield kits, if not worse – Heurelho Gomes looks like some sort of enormous gecko. The grey kit, as modelled by Carlo Cudicini, is not quite so bad, but it’s still an eyesore. Puma, you really have to burn this template. As one reader said, Tottenham is not the only club to have been burdened with this design. Feyenoord fans, for example, are not best pleased with their new kits.
Anyhoo, you know the drill. Rate the kits after the jump…