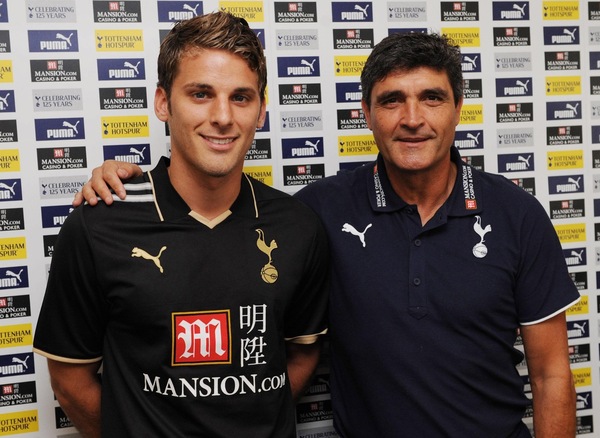 ‘I’ve got a bad feeling about this…’
‘Just smile Daveed, everything will be fine…’
So David Bentley was thumped in the face as he sat in a restaurant. Not nice for the player and especially nasty for his heavily preggo wife, who witnessed the attack.
Even if there’s a very small part of you that thinks ‘He deserved it, the cocky, underperforming shit’, my overriding emotion is sympathy. This is the part about being a famous player that sucks -Â when you’re not playing well and some idiot fan thinks its OK to cross the line. How long before something like this happens again, but with a knife or worse?
Bentley’s agent had this to say about the incident:
‘David is pretty shaken. He was in the restaurant with his best friend and their respective partners. A guy walked over and started talking gibberish to him, then he just took a swing and punched him. David’s fiancÃ©e, who is seven months pregnant, had just been to the loo and saw the whole thing. Obviously, she was very upset about it.
‘David’s mate jumped up and ran after the man and he got punched as well. It was obviously premeditated because the other people at the table got up and ran out of the restaurant. They had taxis waiting outside.’
A guy started talking gibberish to him? Bentley must be used to that, playing under Arry Redknapp.