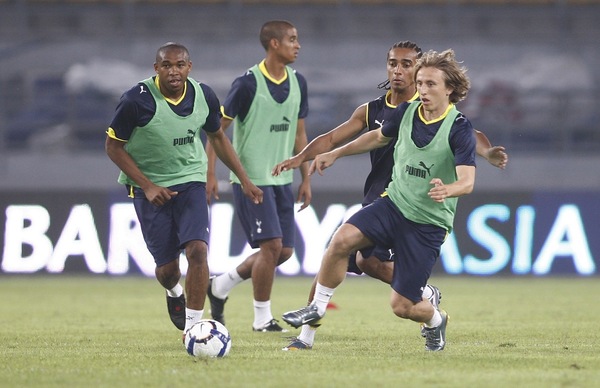 This is where you get to pick Tottenham’s best starting line-up for this season. First up, I’l dazzle you (ahem) with my selection (based on Spurs’ squad at time of writing)…
My XI, played in a fairly standard 4-4-2 formation:
Huerelho Gomes
Vedran Corluka, Jonathan Woodgate, Ledley King, Benoit Assou-Ekotto
Aaron Lennon, Wilson Palacios, Jermaine Jenas, Luka Modric
Robbie Keane, Jermain Defoe
In goal: Gomes gets the nod over Cudicini. The Brazilian still concerns me though. Terrific shot stopper but too erratic and causes panic in his defence. Hopefully he’ll tighten up in his second season at the Lane.
In defence: At full-back, Corluka is solid, while Assou-Ekotto is a greatly improved player. The big concern is at centre-back – King and Woodgate can be brilliant, but they’re way too fragile; the chances of them playing every league game together in 09/10 are slim to none.
In midfield: The idea is that Palacios does all the dirty work and Jenas does his best impression of a decent box-to-box midfielder (sometimes he gets it right). Lots of skill (Modric) and pace (Lennon) on the wing, with Modric free to cut inside when Spurs have the ball. David Bentley, Tom Huddlestone, Jamie O’Hara, John Bostock and Gio dos Santos offer a lot of (unfulfilled) talent in reserve. Didier Zokora’s grit and work rate will be missed.
Up front: Has to be Keane and Defoe as first-choice, with Crouchinho and the useless Pavlyuchenko as impact subs. Darren Bent’s goal threat is a bigger loss than many fans believe. It’s not the greatest striking quartet in the league, by a long way, but a good balance nonetheless. Also will be interested to see how the highly rated Jonathan Obika does on loan at Yeovil.
Overall: Lots of talent but is there enough steel? I’m worred it’s quite a small team too. The likes of Stoke and Blackburn should be able to physically dominate Spurs without any difficulty, but hopefully the team’s pace and guile will counter this. Finishing position in the league this season? I predict 8th.
That’s my take anyway. Now post up your best XI…