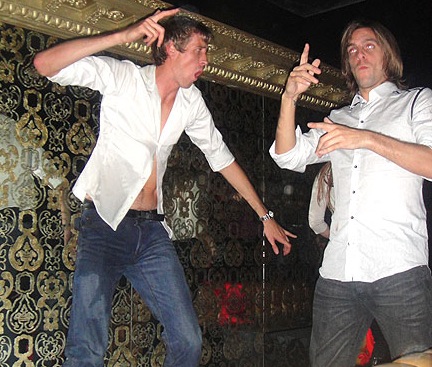 Arry Redknapp was reportedly not a happy bunny after a few of his Spurs players were papped out on the town after the win against Portsmouth.

I know that footballers are finely tuned athletes and professionals and all that crap – but for those of us lucky enough to have a job right now, the latter applies (I happen to be a finely tuned athlete too) to all of us too. In other words, we’re professionals as well, and I imagine that getting pissed affects our ability to do our job. But that doesn’t stop us going out and having a lunchtime pint, or a rollicking good time on Thirsty Thursday etc.

Henry Winter of The Telegraph Tweeted about Crouchy’s antics. It may be daft but why shouldn’t footballers have fun too?

I strongly believe that we should lighten up when it comes to footballers letting their hair down – in the past, ballers got away with murder (all-day sessions, poker games etc.), but now they are expected to live like monks (albeit millionaire monks), leaving their mansions only for training and matches.

The odd night out during a season isn’t going to have that much effect, surely. Sweat it out the next day, as the likes of Bryan Robson and Paul McGrath used to do.

So how about a bit less sanctimony when it comes to letting our heroes let off steam, eh?

What do you think: Should footballers be allowed to have fun like the rest of us?