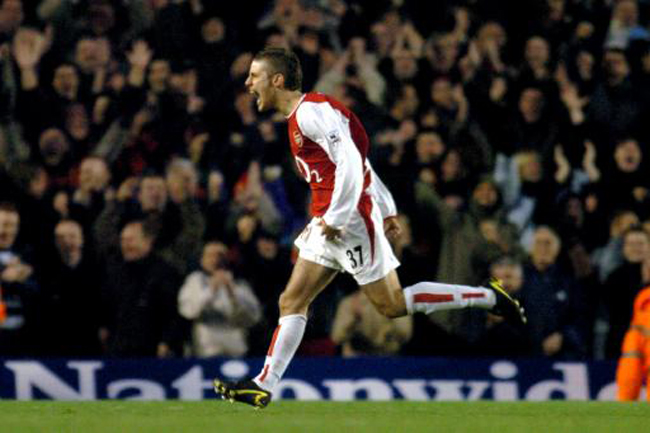 A young David Bentley celebrates his only goal for Arsenal

Once touted (mostly by himself) as the man to replace David Beckham on England’s right wing, Tottenham’s David Bentley is set to miss six months of action following an operation on his left knee. The wideman joined West Ham on loan in the summer but won’t play again until March at the earliest.

Hammers’ boss Sam Allardyce said: “It is a great shame for David as he had settled in well to the squad. We wish him well and hope he has a speedy recovery.”

This is the latest blow to a player who is yet to fulfill his potential. Indeed, Bentley  has consistently failed to make the most of his undoubted talent, and at 27 years old, he should be enjoying his peak years in the game instead of loitering on the fringes of the big time.

Remember, this is the guy who…

1. After breaking into the England set up, had a ‘DB7’ slogan stitched on to his St George’s Cross boots while, at the same time, his agent explored the possibility of commercial deals.

2. Smashed his Porsche into a lamppost after returning home from a late-night gig under the influence.

3. Bought a bar in the posh Spanish resort of Puerto Banus, something his Tottenham boss Harry Redknapp was less than happy about. “I think needs to be giving him good advice”, ‘Arry said at the time. “He doesn’t need to be involved in nightclubs in Spain or whatever. The advice he needs from a good agent is ‘Concentrate on your football, David’.”

4. Publicly urged Theo Walcott to leave Arsenal if he wanted to further his career. Walcott has since gone on to earn himself 19 caps (and three goals) for the Three Lions along with 184 appearances (and 34 goals) for Arsenal while Bentley accrued just seven caps (and no goals).

Indeed, Bentley’s career is something of a lesson for young footballers that innate talent isn’t enough on its own, it has to be partnered with the right attitude and a bit of humility.

However, let’s not forget what a superb footballer he can be, if he just puts his mind to it.