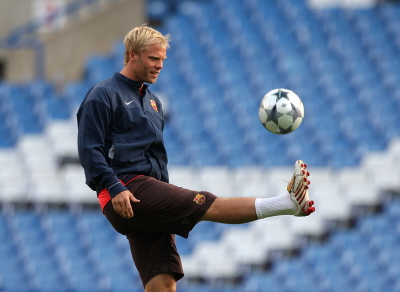 Eidur Gudjohnsen is seriously considering a return to the Premier League with Blackburn Rovers said to be keen to acquire the services of the former Barcelona man, according to his father and agent, Arnor Gudjohnsen.

A move to Ewood park would see Gudjohnsen reunited with his former manager Sam Allardyce and after enduring a torrid time in France with AS Monaco, a friendly face may be a welcome sight for the Icelandic forward.

During his short stay on the Riviera, Gudjohnsen has failed to settle convincingly and after alleged ‘bust-ups’ with coaches and team mates he is eager to leave the Ligue 1 team and return to the Premier League where, arguably, The former Chelsea and Bolton player enjoyed his best form.

At 31, you’d be excused for thinking that Gudjohnsen may be winding down but Allardyce has a proven record in rejuvenating flagging stars (think Djorkaeff, Okocha et al) so it may prove to be a beneficial move for all the parties involved. His game has never revolved around searing pace anyway and we have seen in the past just how cultured a footballer he can be so it may prove to be a wonderful bit of business by the Lancashire team, especially as the fees being bandied around range from £1.5 – 3.5 million which represents good value for a player who is, on his day, world class.

Would the aquisition of Gudjohnsen be a good move for Rovers? And would you like to see ‘Guddy’ back in the Premier League?