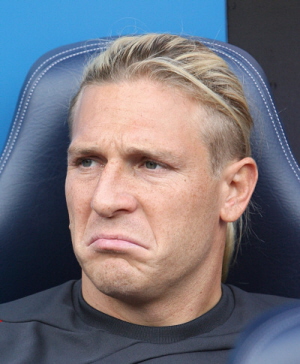 Voronin sums up his Liverpool career in one facial expression

Liverpool fans will be celebrating the most successful period in their club’s recent history today after it has been announced that Andriy Voronin has signed for Russian Premier League side Dinamo Moscow.

The news comes just days after The Reds managed to recoup £4.5 million for Andrea Dossena when the abysmal full-back joined Napoli on Friday. It is rumoured that Dinamo have paid in the region of £2 million to sign Voronin on a three and a half year contract.

The 30 year old striker has failed to make any kind of positive impression at Anfield and managed only five league goals in 40 appearances during his time there, leading to him becoming increasingly derided by fans and casual spectators alike.

After spending the whole of the last campaign on loan at German side Hertha Berlin, Voronin found himself down the pecking order behind Fernando Torres (natch) and the flimsy David Ngog – despite Torres’ injury problems, the Ukrainian wasn’t able to force himself back into first-team contention this season, with Rafa Benitez preferring to field the French youngster instead.

I’ve given Rafa Benitez a bit of a hard time about his tenuous dealings in the transfer market in the past but after managing to raise £6.5 million for a pair of abject donkeys, maybe he deserves a bit more credit at last.