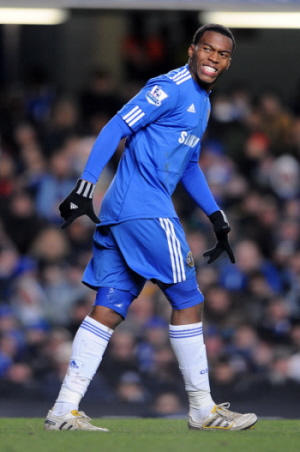 Nasty blisters have blighted Sturridge throughout his career

An independent tribunal set up by the Premier League has, this morning, concluded that Chelsea are to pay Manchester City an initial fee of £3.5 million for their young striker Daniel Sturridge who moved between the clubs last July.

That sum in isolation would seem like decent value for one of English football’s brightest prospects but there are a few other charges that, in addition, will add up to a ludicrous amount for a player who is (at best) a rough diamond.

The initial fee will rise to £6.5 million if Sturridge makes 40 appearances for The Blues plus £500,000 for every 10 appearances he makes in any competition up to the value of £2 million and a further £1 million if the striker plays for the full national team.

With Sturridge also said to be earning a reported £60,000-a-week at Stamford Bridge then, if all the aforementioned clauses are triggered, Chelsea may stand to shell out nearly £15 million on the 20 year old forward over his four year contract.

Manchester City will not see all of this cash though as Sturridge’s former club Coventry City stand to make a £350,000 windfall on the deal due to a prior sell-on clause put in place when the striker left The Sky Blue’s academy in 2003.