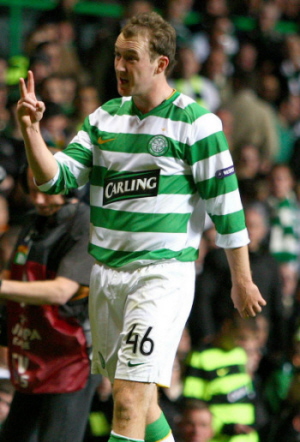 Aiden spots Barry Ferguson and Allan McGregor in the crowd

After already having a £10 million bid rejected by Celtic, Birmingham have returned with a substantial £14 million offer for winger Aiden McGeady. Alex McLeish has seemingly given up on tempting Liverpool flop Ryan Babel to St. Andrews and has instead made the Republic of Ireland international his top target during the transfer window.

Celtic are understandably unwilling to lose their most prized asset as McGeady has been one of their most outstanding performers in what has been an inconsistent outing so far this season for the Glasgow club, but Birmingham are keen to bring the tricky winger (who, for me, is reminiscent of a young Damien Duff) to the Premier League.

McGeady looks like a wonderful talent with significant potential for improvement and securing the Irishman’s signature would represent a fair old coup for Birmingham as a host of top European clubs are said to be tracking the 23 year old (Bayern Munich and Juventus are known to be admirers of the midfielder).

To me £14 million sounds a bit on the heavy side for a player whose ‘final product’ has been bought into question numerous times and has a track history of reacting badly to critcism (I think Gordon Strachan would testify to that) but it seems it is going to take a sizeable bid to tempt a reluctant Celtic into selling.

If ‘Big Eck’ can iron out the kinks, do you reckon McGeady would be good value for the money in question?