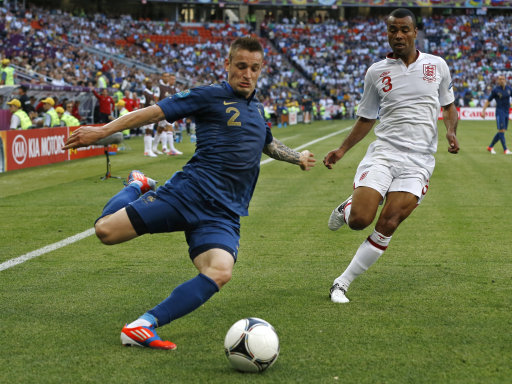 With Yohan Cabaye, Hatem Ben Arfa, Sylvain Marveaux, and Gabriel Obertan  all currently at the club along with French-born Senegal international Demba Ba and youngsters Romain Amalfitano (French) and Mehdi Abeid (Algerian, French-born), Alan Pardew’s Newcastle has become something of a French Quarter in the north-east.

Now, Pardew is set to add even more top class Gallic talent to the Magpies in the form of Les Bleus right-back Mathieu Debuchy, who looks set to join the club from Lille.

A fine player, Debuchy’s arrival could spell the end of the road for Englishman Danny Simpson, with the full-back’s contract set to expire in the summer anyway.

Interestingly, in that mad 7-3 game at the Emirates on Saturday, Pardew’s first 11 consisted of two French, two Senegalese, two English, one Ivorian, one Burundi international, one Argentinian, one Dutch and one Italian player (while Arsenal had four Englishmen starting).

This is all a far cry from 2006, when Pardew, then in charge at West Ham, questioned Arsenal during their Champions League campaign (which saw them reach the final). Back then, Pardew said:

“I saw a headline saying Arsenal are flying the flag for Britain. I kind of wondered where that British involvement actually was when I looked at their team.”

“It’s important that top clubs don’t lose sight of the fact that it’s the English Premier League and English players should be involved.”

“Foreign players have been fantastic. We have learned from them and from foreign coaches. But, to some extent, we could lose the soul of British football – the English player.”