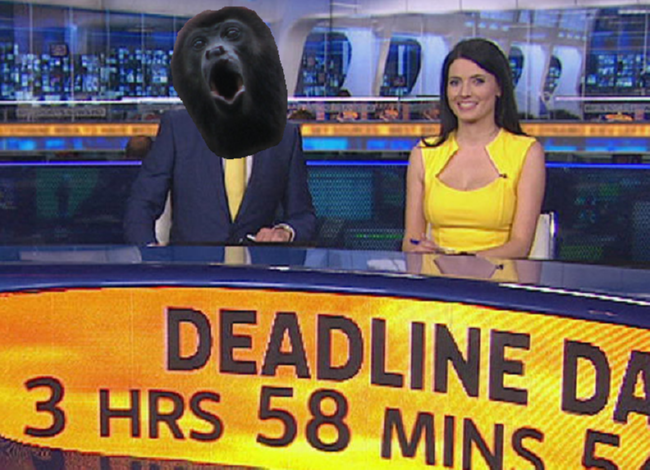 What with it being Transfer Deadline Day™ again, we thought we’d offer you an alternative to the 96-decibel dung tornado over on Sky Sports News by offering an altogether quieter round-up of the today’s confirmed moves, rubber-stamped loans and the most gloriously ludicrous rumours that crop up over the course.

Basically, we’ll keep going till we just can’t be arsed anymore. Also, feel free to leave your favourite rumours or ‘in the know’ transfer reconnaissance in the comments section. We’re all friends here after all.

Please bear in mind that the most recent bulletins will be at the top of the pile, so hit refresh to see the latest tittle-tattle…

– It’s been reported on Sky Sports News (via @LadyArse) that West Ham have received a bid that has triggered Mohamed Diame’s £3.5 million release clause. Club not named but there’s more than a suspicion that it’s Arsenal or Tottenham.

– The latest news in the Odemwingie ordeal is that West Brom are now conversing with their lawyers. This could get messy.

– BBC are reporting that West Brom have not given QPR permission to speak to Peter Odemwingie despite the player currently being at Loftus Road. Must just be there for the stadium tour *tap tap tap tap*.

– Twitter rumours going around that after having four bids rejected already today, Norwich have finally had an offer of £9.2 million accepted for Celtic’s Gary Hooper. Ludicrous. 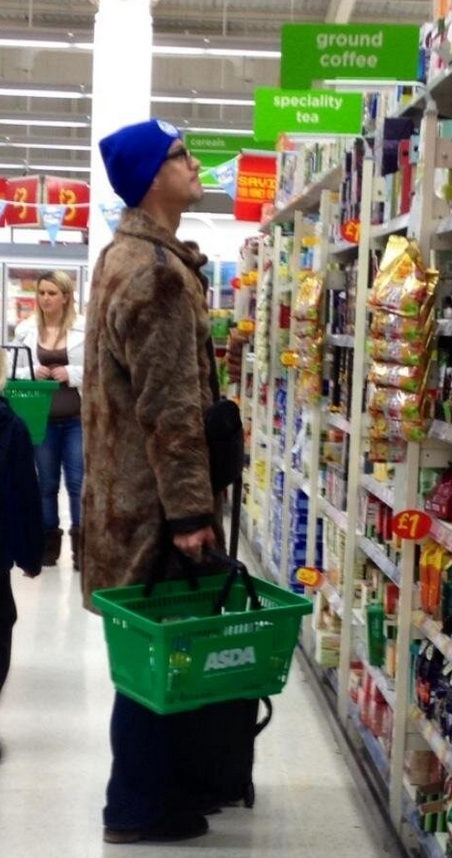 – Paul Scharner has re-signed for Wigan on loan from Hamburg. Here he is picking up some supplies in his local Asda.

– Adding a little gravitas to the Arsenal/Monreal story: Sky Sports News’ Spanish football expert Graham Hunter has said that Malaga have just signed a replacement left-back in the form of Pacos Ferreira’s Vitorino Antunes – thus clearing the way for Monreal to move to The Emirates.

– The Sun (among others) are reporting that Arsenal have agreed an £8.7 million fee with Malaga for Nacho Monreal and the Spanish left-back is now having a medical in London. 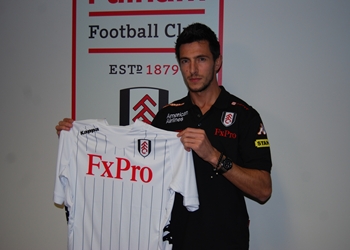 – OFFICIAL: Fulham have signed 29-year-old PSV left-back Stanislav Manolev on loan until the summer with an option of two further years. Anyone know if he’s any good? (Image: Fulham)

– OFFICIAL: Ajax have signed Barcelona whippersnapper Isaac Cuenca on loan for the next five months.

– QPR are still after Peter Odemwingie for reasons unbeknownst, but West Brom have told them that they can only have him if Junior Hoilett is allowed to move to The Hawthorns on loan for the rest of the season with QPR continuing to pay 100% of his wages. You go West Brom!

– OFFICIAL: Leeds United have completed the permanent signing of Aston Villa left-back Steven Warnock. React to that as you see fit. 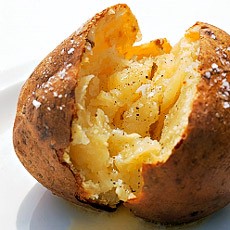 – Right, we’re having a wee break for a while after ten-straight hours at the coal face. Be back after I’ve had a jacket potato and a cup of tea.

– Couple of Arsenal fans are telling us that Radio Marca are reporting Malaga left-back Nacho Monreal is on his way to London. Arsenal need a left-back, Monreal is a left-back. Arsene? You awake buddy?

– More flotsam on its way out of White Hart Lane: According to Sky Sports News, Jermaine Jenas has just arrived at Loftus Road to put the finishing touches on a move from Tottenham.

– OFFICIAL: Tottenham flapper Heurelho Gomes has joined Hoffenheim on loan until the end of the season. He will be sorely missed. 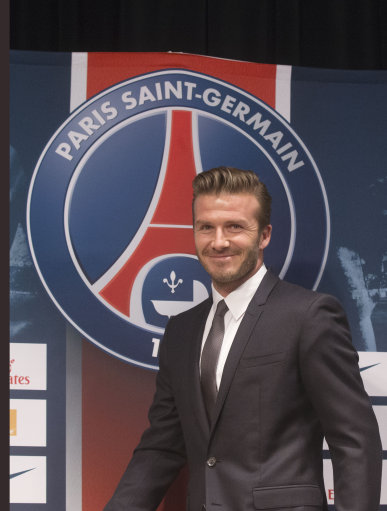 – David Beckham has, as expected, joined PSG on a five-month contract. His salary will go to charity. Read Pies’ take on the whole shebang here.

– Speaking in only his fourth or fifth interview with Sky Sports News of the day, QPR manager Harry Redknapp has confessed that it just “wasn’t possible” to hammer out a deal with Stoke for Peter Crouch. Expect the move to go through tomorrow morning after Redknapp submits a trademark 10:59pm offer which gets snarled up in the FA’s fax network.

– Christ on a pushbike! We’re hearing that Anzhi have submitted a £34 million bid for Shakhtar winger Willian. Not an awful lot of Premier League clubs are going to be able to compete with that bad boy!

– The odds on David Villa joining Arsenal before the close of play keep shortening this afternoon, not that it means an awful lot in the grand scheme.

– Here’s hoping Dave Beckham puts on the same faux French accent as Joey Barton for his maiden PSG press conference. The Beeb are live streaming it here, directly onto your face!

– The transfer that broke Twitter: Rory Delap has joined Barnsley on loan for the rest of season. Barnsley’s just a stone’s throw away from Stoke, but only if you’re Rory Delap.

– Alvaro Negredo’s agent has said that his boy won’t be leaving Sevilla today, telling the Liverpool Echo: “It’s impossible. I know [Sevilla] have spoken to Everton but there is no way it will happen. Unfortunately there is no chance because Sevilla simply don’t want to lose him, and if they do they will ask for crazy money.” This was after Everton’s €14 million was rejected by the Spanish club.

– Stoke have near-as-damnit signed 22-year-old USA international Brek Shea from FC Dallas for £2.5 million but the Potters are still waiting on a work permit and a pending medical.

– Fulham have nixed their £5 million pursuit of Tom Huddlestone with the express intent of ploughing all their pocket money into the capture of Bafetimbi Gomis from Lyon, though Tottenham are also being spuriously linked to the French target man. 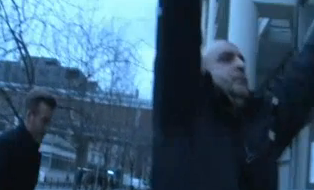 – Le Parisien have video footage of David Beckham arriving at PSG, complete with utterly unconvincing camera-blocking technique from one of his security bods. Take a lookie here. 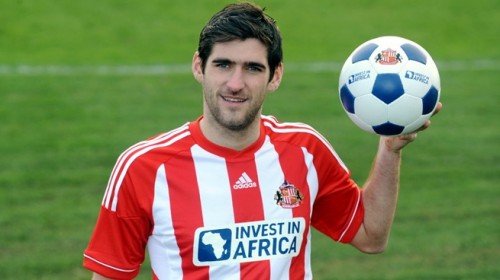 – OFFICIAL: After a lot of faffing about, Sunderland have completed the £5 million signing of Danny Graham from Swansea on a three-and-a-half-year deal.

– A French radio station are claiming that David Beckham has completed his medical at PSG’s Camp des Loges training HQ ahead of him being officially announced at the club’s 16:00 BST press conference.

– The official line is that the club don’t expect to make any deadline day signings, but rumours are floating around that Newcastle are in talks with Ajax about nabbing their captain, Siem de Jong, off them for around £8 million. 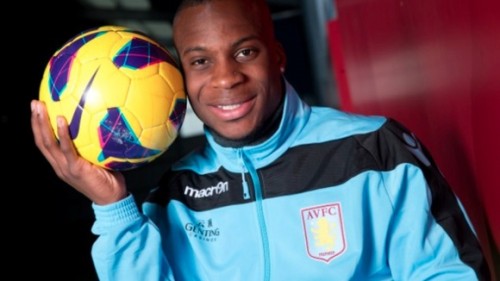 – Despite only joining Man City in the summer, it looks like Big Sam is plotting a loan move for Jack Rodwell. West Ham are pushing hard to get the deal done if rumours are to be believed.

– Everton are in talks to sign more-than-decent Spanish striker Alvaro Negredo from Sevilla (remember when Hull City were linked with him?). Apparently Sevilla want €20 million for him, but the Toffees are sure they can haggle them down as ‘financial issues’ are rife at the Spanish club.

– Liverpool are in talks with their spare ‘keeper Doni about cancelling his contract and releasing him back into the wild.

– OFFICIAL: BBC Sport are reporting that Middlesbrough boss Tony Mowbray has told BBC Tees that Kieron Dyer has joined Boro on short-term deal. Presumably there are more clauses in that contract than in Santa’s address book.

– Rumours are going around that, given the news of Kieran Gibbs’ latest injury, Arsene Wenger is preparing offers for left-backs Alvaro Pereira (of Inter) and the wonderfully named Gaetan Bong (of Valenciennes) – though this is Arsenal we’re talking about here so you can pretty much go ahead and ignore all of this.

– Stoke are having bids knocked back left, right and centre today. First Arsenal kiboshed their loan approach for Carl Jenkinsom, now Marseille have rejected an offer for Rod Fanni (stop smirking at the back).

– We’re hearing that Fulham are beavering away trying to secure a loan deal for Roma ‘keeper Maarten Stekelenburg (with an option to buy) until the end of the season. One thing we know about the Dutch stopper, his hands aren’t quite as safe as they might be! 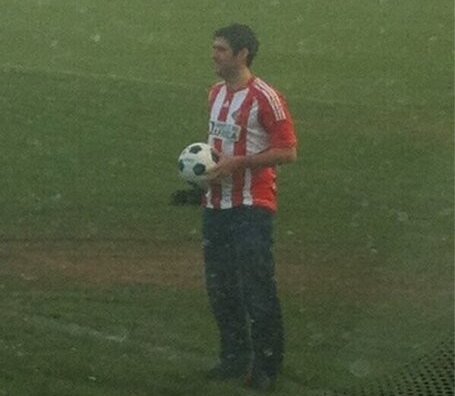 – Hang on, scrap that! Danny Graham to Sunderland is a done deal if this photo of him posing in a Black Cats’ shirt is anything to go by.

– According to ITV Sport, Swansea striker Danny Graham is to undergo a medical at Sunderland this afternoon while the two sides continue to barter over a fee. Swansea holding out for £6 million by all accounts. 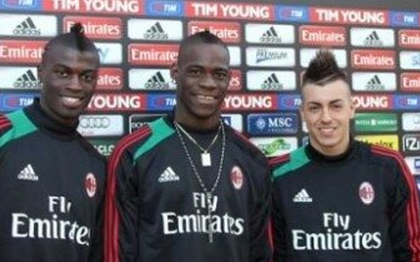 – Photo (via @Milanello): Mario Balotelli and the rest of the new-look Milan frontline, M’Baye Niang and Stephan El Shaarawy.

– Aston Villa are within spitting distance of completing the signing of France U21 midfielder Yacouba Sylla from French second tier side Clermont Foot after he passed medical this morning.

– OFFICIAL: Fulham are “delighted” to announce the loan signing of versatile AC Milan left-back/midfielder Urby Emanuelson until the end of the season. Here’s the blurb from their official site.

– Applying some of rudimentary mathematics, we make it that QPR are making a £35.9 million total outlay on Samba. They’re fucked. Totally fucked. 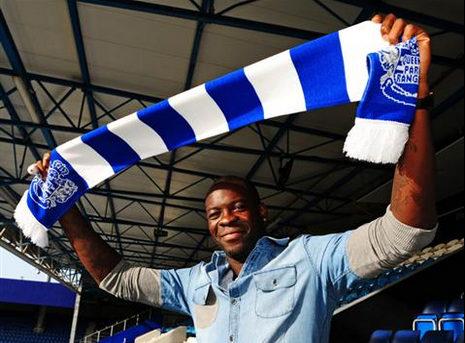 – QPR have confirmed that they have completed a club record deal for Chris Samba via their official website. The details are undisclosed but believed to be a £12.5 million fee and a £100,000-a-week, four-and-a-half-year contract. What was that about not letting the owners have their pants pulled down ‘Arry?

– L’Equipe are reporting that Tottenham and/or Arsenal want to sign Lyon striker Lisandro Lopez on loan, but Lyon will only discuss a permanent move. 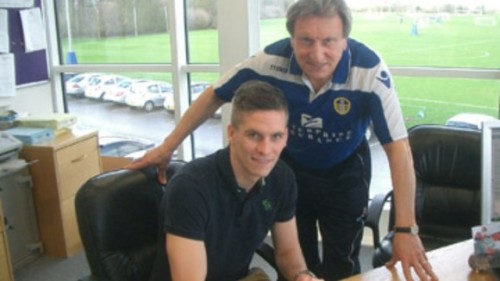 – OFFICIAL (via BBC Sport): Norwich have signed Luciano Becchio from Leeds in a deal that will see Steve Morison going the other way. Yes folks, it’s a good ol’ fashioned swap deal! You don’t get many of them to the pound. (Image via ITV) 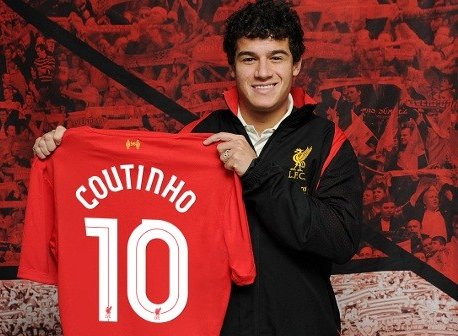 – Andrey Arshavin has turned down a loan move to Reading.

– Leeds striker Luciano Becchio has passed a medical at Norwich which means the Canaries are probably going to knock their efforts to sign Celtic’s Gary Hooper on the head.

– It’s just dawned on us: Beckham and Zlatan? Free-kicks are about to get jolly awkward at PSG.

– OFFICIAL: Palermo have announced the signing of QPR midfielder Alejandro Faurlin on loan until the end of the season.

– Fulham are mulling over a £5 million move for silken Spurs’ midfielder Tom Huddlestone, but will only sign him if he promises to trim down his gargantuan afro.

– Tottenham’s buffoonish goalkeeper Heurelho Gomes is currently flying to Germany for a medical with Hoffenheim. Five-month loan deal in the offing.

– Word on the wire is that David Beckham will sign for PSG today. The French club have called a 5pm press conference for this afternoon and it’s thought they’ll use it to unveil Becks.

– Despite Barca saying they have no intention of selling him, a couple of sources are claiming that Arsenal will table a £12 million bid for David Villa before the end of the day.

– After missing out on Jack Butland, Chelsea have turned their sights to Stoke’s Asmir Begovic to provide able back-up to Petr Cech. Several papers saying that a bid is imminent.

– Apparently QPR have offered £12.5 million for Chris Samba plus a weekly wage of £100,000. Looks like Tony and ‘Arry are dipping into next year’s TV money already. What could possibly go wrong?