The following photo has been circulating over the past few hours, appearing to show Real Madrid coach Jose Mourinho – and this is the point where you may want to find something leathery to bite down on or ingest some particularly strong anti-depressant medication – IN IKEA, POSSIBLY BUYING BOXES, TAPE AND/OR OTHER MISCELLANEOUS PACKING MATERIALS… 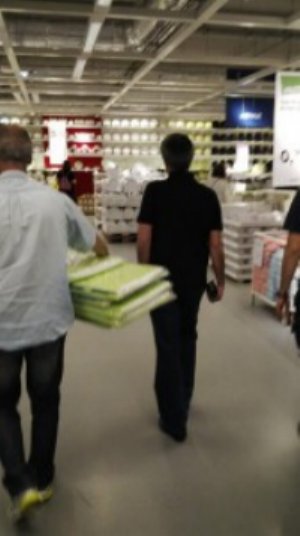 Woah. That’s a conclusive as you’re ever likely to get.

Of course, this has been taken to mean that Mourinho is now definitely on his way to Chelsea as why else would he be PACKING UP HIS BELONGINGS? It’s just like that time he was spotted in London buying donuts a couple of years ago. It’s a sign!

Ever being the voice of reason, Pies would like to proffer the following alternative explanations…

1. It’s not Mourinho
2. It is Mourinho and he’s merely got a big car-boot sale on this weekend – selling off all his old Barcelona training jackets.
3. He just really likes Ikea hotdogs

Obviously we can’t confirm or deny anything, but the truth is out there people.