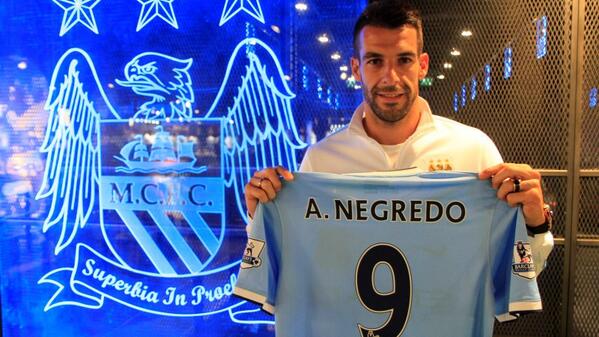 Manchester City have just confirmed via their official Twitter feed that Alvaro Negredo has joined the club from Sevilla in a deal initially worth €19million (£16.4million) with €5million’s worth of add-ons (£4.2million) bunged into the mix for good measure – so let’s call it a nice, round £20million and have done with it.

Negredo has signed a three-year contract at City and will wear the vacant No.9 shirt, with the Spanish hitman now due to fly out and bolster the club’s ailing pre-season effort in South Africa.

While we’re on the subject, Fiorentina have also announced that they have agreed a fee with City for the transfer of forward Stevan Jovetic, which La Viola say is around the £22.4million mark. The deal is reportedly very close to completion as all that is left for Jovetic to do is sign the contract on the table, with City aiming to tie it up before the weekend is out.

City are doing some good (if not expensive) business this summer, no? What better way to combat a paucity of goals and attacking flair than by SIGNING ALL THE STRIKERS IN THE WORLD! Mwuhahahahahaaaaa!!!