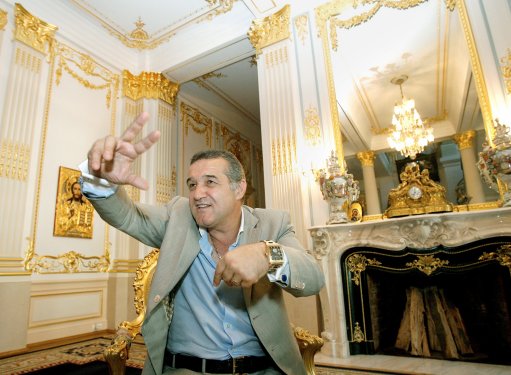 Romanian prisons really are a cut above

While it’s not uncommon for club chairmen to wade in and scupper a transfer deal at the 11th hour, it’s slightly rarer for them to have to do it from their prison cell – though that is exactly what lunatic Steaua Bucharest owner Gigi Becali has done, ordering his underlings to pull the plug on Tottenham’s approach for highly-rated Steaua centre-half Vlad Chiriches from the 6’x8′ Honeymoon Suite at the Rahova jail.

According to Steaua manager Mihai Stoica, Becali used his daily phone call to get in touch with the club and demand that no-one sell Chiriches, especially before Steaua’s Champions League qualifier against Dinamo Tbilisi.

Stoica gave a verbatim run-through of Becali’s message to a local newspaper:

“[Becali said:] “Who are Tottenham?! Do not do any transfer, my name is Gigi Becali! I’m not a slave to anybody! We have an important game in the Champions League, why can’t they wait?

“Until winter he will not leave under any circumstances. This could be a blow to Chiriches, but he should understand. He owes a lot to Steaua. Things are good, we are in qualifying for the Champions League. We are in good shape.”

Unsurprisingly Tottenham, realising when to leave well alone, have since pulled out of the €8million deal – the right thing to do, considering they’re dealing with a fairly awful peice of work in the shape of Becali.

Already serving four years after being caught out in a dodgy land sale, Becali  – a former gypsy shepherd – has a long rap-sheet of racist, xenophobic, homophobic (he once banned all Queen records from playing at Steaua’s stadium because of Freddie Mercury’s sexual orientation) , anti-semetic and violent outbursts while serving in political office as well as several moments of lunacy in his capacity as football chairman – e.g, once cancelling the loan of Polish midfielder Rafal Grzelak and sending him back to his parent club back in 2010 because he was follically challenged. “There aren’t any great bald football players,” was the official explanation.

If you needed any more convincing that Becali is a bit of a conker box, then please note that the man has these two paintings of himself hanging in his front room… 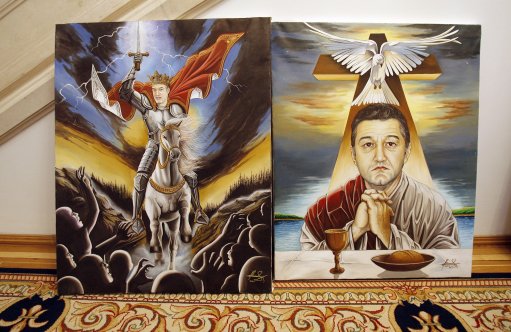 We rest our case your honour.