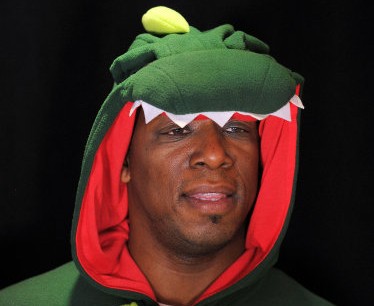 Former Arsenal striker and bona fide Gunners legend Ian Wright has popped his head above the parapet and strongly advised Luis Suarez not to ditch Liverpool and join his former club this summer. Got that?

“I’d welcome him at Arsenal with open arms, but if I was Suarez, when you look at everything, it does seem strange he would want to go to Arsenal. I would give Liverpool another season.

“Arsenal finally realise they’ve got to get up there with the big boys otherwise they will be left behind.”

Speaking in reference to Steven Gerrard’s recent comments that both clubs will be duking it out for fourth place this coming season and that he couldn’t see the sense in Suarez joining Arsenal, Wright waffled on:

“Gerrard is not someone who comes out and says things flippantly. If you look at Arsenal – not won anything in eight years, just challenging for fourth place, not really any players there who will make him say ‘I’m going to play with him and him’ – Gerrard has got a point.

“Suarez is a world-class striker and if he didn’t have all the baggage around him, I feel the Barcelonas, Real Madrids and Bayern Munichs would be sniffing around.

“That’s why I believe Arsenal should try to bring him in – because I feel it’s the only time they could get someone like that. In another market, I don’t think he’d even look at Arsenal.

“I would like to see them go as far as they can to get Suarez, but they can’t just buy him and not replenish the rest of the team. I think they need a goalkeeper, two centre-halves, two full-backs – for both left-back and right-back positions – another midfielder and two strikers.

“It doesn’t make sense buying Suarez for that money and not backing it up with other signings of the same stature.”

So should they buy him? Shouldn’t they? To be honest, we’re a little lost here.

Amazing that this sudden outburst of opinion should come on the very day that Wright was revealed as the new co-host of BBC Radio 5 live’s 606 football phone-in, isn’t it?

In short, everyone just keep on taking no notice of anything Ian Wright says.