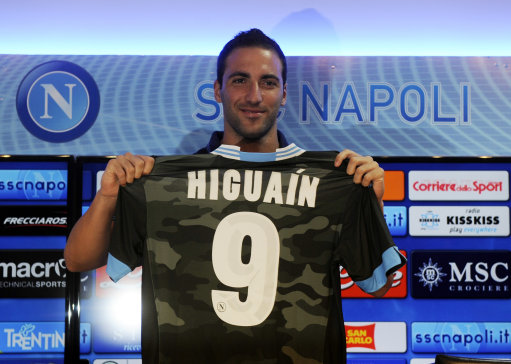 Higuain at his Arsenal unveiling

There’s a little snippet of transfer toss being peddled by BBC Sport journo David Ornstein this morning that will sound all-too familar to the Arsenal faithful, with reports suggesting that the Gunners actually managed to agree terms with Gonzalo Higuain over a move from Real Madrid, last month shortly before he pottered off and joined Napoli for a million zillion pounds.

That’s right. It looks like Arsenal had all the papers drawn up and everything in the garden looked rosy until their heads were turned as they farted about with activating Luis Suarez’s various fictional and non-fictional contract clauses.

The Higuain proceedings weren’t finalised and the Argentinian striker drifted away out of the open window and into Napoli’s welcoming arms.

Still, Yaya Sanogo and all that.