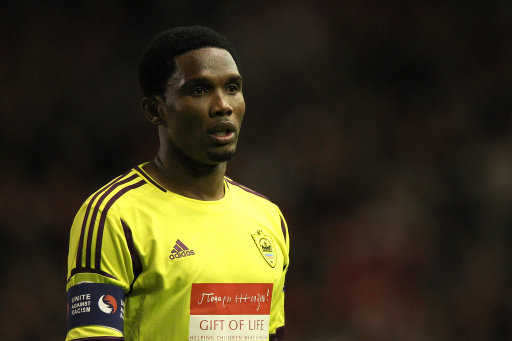 No doubt you’ve heard by now that Anzhi owner Suleyman Kerimov is attempting to curb his overheads at the moment after realising that attempting to create a European footballing superpower in the remote Dagestan mountains may not have been the smartest business venture he ever made, meaning that most of the club’s vastly-overpaid squad is up for grabs.

With that in mind, Chelsea are being linked with a move for the plumpest of Anzhi’s cash cows, one Samuel Eto’o, amid reports that, as well as Kerimov being desperate to surgically remove the Cameroonian striker’s gargantuan wages from his significant list of weekly outgoings, Eto’o has once again fallen out with several of his squad-mates.

Indeed, it’s been said that relatively new signing Igor Denisov (who has previous when it comes to taking umbrage with disproportionately paid “stars”) has refused to train with Eto’o as the striker has been muscling in on tactical sessions of late and effectively trying to conduct most of them himself.

Anyway, it’s being reported this morning by most of the papers/rolling news channels that Eto’o has issued a good ol’ fashioned “come and get me plea” to Chelsea manager Jose Mourinho, buttering up his old Inter Milan coach’s parsnips by telling Russian press:

“There is only one Jose Mourinho. I have played under a lot of great coaches – but there is no other character in the game like Jose.

“He is one of the best coaches in the world – and we had a lot of success together at Inter Milan. I would like to have the chance to play under him again – because it is never boring when Jose is around.

“Of course Chelsea are a great team – and when we have all the offers on the table then I will discuss with my agent and see what my next step is.”

Eto’o also claimed it’d be a dream to “wear the jersey of a glorious club like Napoli”. He truly is an agent’s dream.

So, would Chelsea be right to have a flutter on him?

For our money, now aged 32, Eto’o is a busted flush who has spent the last two years at Anzhi swanning around with the impervious air of a man who earns €250,000 every minute while contributing very little in the way of actual footballing pay-off.

He’s also got a long history of making trouble wherever he goes due to the fact that he seems to believe he exists on a higher plane of humanity than everyone else.