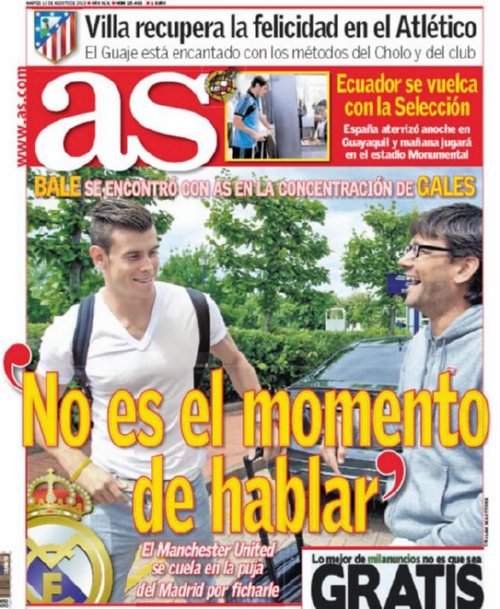 The combination of a footballing fallow period and the tabloid papers being pressured into “getting creative” in order to fill their sucking-wound columns is a potentially maddening one and, increasingly from what we’ve seen this summer, transfer dealings and the spurious tittle-tattle that envelopes them are being reported in ever decreasing minutiae – to the point, in fact, where “Gareth Bale returns to Spurs training” spent almost all day on Sky Sports News’ rolling ticker not so very long ago.

Yep, “man turns up for work” was the headline on that famous day. What a truly glorious age we live in.

That said, if you think that the British press hordes are disconcertingly obsessed with the empire of shite they’ve created for themselves, then we’d give the Spanish papers a miss at the moment as both Real Madrid-centric outlets, AS and MARCA, are currently in the midst of dedicating their entire summer to hounding Gareth Bale out of Tottenham and into the Praying Mantis arms of their beloved club.

It’s been non-stop since last season; tippy-tapping, conjuring “come and get me’s” out of the ether, recycling old Luka Modric quotes and attributing them to Bale, etc, etc. Ever low-down trick in the gutter press book.

It’s been perpetual, daily, nonsense – but they have their editorial line and, in times as lean as these, they’re going to suckle at its teat until it drops off. 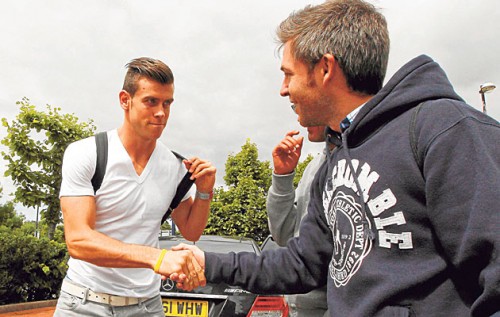 Indeed, things have taken a turn for the sinister today with the news that journalists from AS and Marca (including one of the AS editors) have effectively spent the day stalking Bale, door-stepping him outside his house in the a.m and badgering him all the way to Newport, Wales where his national team are convening ahead of an international friendly against Northern Ireland in midweek – farting questions at his face every step of the way.

It would appear that the hacks have been camped outside Bale’s abode for a couple of days, with Marca subsequently reporting that they’d stood near the Tottenham winger while he packed his bags into his car at one point. Hold the front page.

According to a passage that was later published in AS (which was tracked down and translated by the guys over at Sports Witness), the brief exchange outside Wales’ training HQ went something like this:

‘”You know who I am?”. [Bale] followed the lesson he’d learnt well and was unresponsive. [The AS editor] continued: “I’m the bogeyman.”

‘We accompanied him to the door of the hotel with a flurry of questions: “How are you? Is this a hard time, you’re gonna play with Wales?”. No response.’

AS did manage to coax one incendiary quote out of Bale during their stalking campaign however  – “I’m sorry, it’s really not the time to talk” – which they duly translated into Spanish and plastered across their front page.

Was that really worth it? Spending days outside the house of a man (who has a young family, let’s not forget) and coming up with nothing more than that inconsequential nugget of watery gnat vomit?