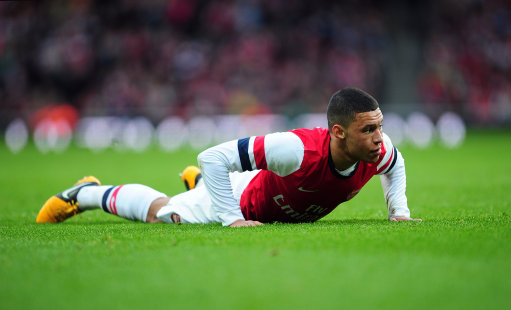 Given that it’s Arsene Wenger-huntin’ season at the moment, a story has conveniently bubbled it’s way to the surface this morning which suggests the Arsenal manager indulged in a spot of jiggery pokey with Alex Oxlade-Chamberlain’s first-team minutes last season in order to circumvent a clause in his contract that apparently stated the Gunners’ had to pay The Ox’s former club Southampton £10,000 every time the young midfielder played more than 20 minutes in a game.

Writing in the Mail, Neil Ashton claims to have the inside line on the revelations, spouting thus:

“Wenger’s detailed knowledge of every player’s contract even created an issue when Oxlade-Chamberlain was making substitute appearances for Arsenal last season.

“Written into the England winger’s deal is a clause stating that Arsenal must pay Saints £10,000 every time Oxlade-Chamberlain appears for more than 20 minutes.

“Arsenal’s accounts department were stunned to receive an email from Southampton demanding payment for the appearances, with the south coast club justifying their argument based on stoppage time.

“Eventually Arsenal agreed to pay for the appearances and the story worked its way around the offices at the Emirates with bafflement among staff.”

Now, as far as we’re concerned this smacks of a journo, desperate for a hook, who’s taken a cursory glance at Oxlade-Chamberlain’s appearance record last season, noticed a “sub-20 minute” trend and concocted himself a story from there – going on to gripe at length about Wenger “drowning in Arsenal’s tired old transfer formula.”

Who knows, maybe there is something in the Ox/clause rumours, but even if so, surely Wenger is not the one to blame as it wouldn’t be his place to insert such a clause in the first place? That’d be the Arsenal legal dept. or the chief executives (i.e, Ivan Gazidis) or whoever is responsible for pushing these deals through. Hey ho. Ultimately, it doesn’t really matter.

As we say, it’s Arsene-huntin’ season again. Go get your fill.