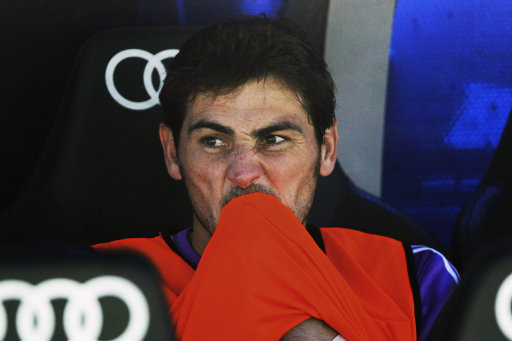 According to the El Pais newspaper today, Jose Mourinho’s parting advice to Florentino Perez before he left for Chelsea in was that he should sell Iker Casillas if he wanted any of his future managers to enjoy success at the Bernabeu.

Quite what went on between the two is unclear, but it was generally assumed that Mourinho was merely pulling one of his “I’m not afraid to drop anybody” alpha dog stunts in order to deflate Casillas’ ego and keep his self-entitlement in check. After all, no-one is bigger than the team when Mourinho is in charge.

Anyway, the net result is that Casillas has found himself bench-bound for over half of the 2012/13 season. It seemed unthinkable that the 23-year, 500+ game veteran should be anywhere other than top of the pecking order, yet Diego Lopez continues to hold down the No.1 spot at Real under Carlo Ancelotti, chiefly, one suspects, as he hasn’t put a foot wrong since being elevated to first choice.

And lo, here come the rumblings.

Obviously Casillas is not content with his lot at Real and is now looking elsewhere. Having missed out on Valencia’s Vicente Guaita yesterday, Arsenal are being linked with a move for the ‘keeper (by the Guardian) but, because they’re Arsenal, are duly expected to balk at Real’s £15million valuation of the 32-year-old and attempt to haggle the Spaniards down by about…oh, £15million or so.

Barcelona goonsquad Sandro Rosell, Andoni Zubizarreta and Javier Fausare are also reported to be hovering with a plan to raid the enemy’s camp at midnight and escape with their former company boy-turned-turncoat.

This, of course, will never happen in a month of Sundays.