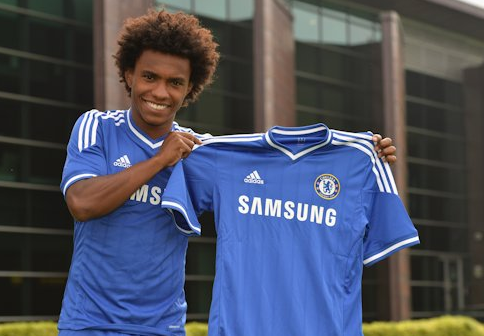 Chelsea have confirmed that, following a successful work permit appeal, Willian has joined the club from Anzhi Mikhailgorbachev for the princely sum of £32million, with the 25-year-old Brazilian attacker signing a five-year deal at Stamford Bridge.

The transfer of Willian to Chelsea has been completed: http://t.co/Q2lAIRtHEm #CFC

So, have Chelsea got their money’s worth? We’d venture not. Willian’s proven to be sporadically exciting and all, but we’d never fathom putting him in the “30-million-pound player” bracket in a month of Sundays, though perhaps judging a player’s worth as opposed to their valuation in the transfer market is a redundant concept these days.

Any road up, Chelsea’s quest to buy up the world’s reserve of B-list attacking midfielders takes another giant leap into the ridiculous.