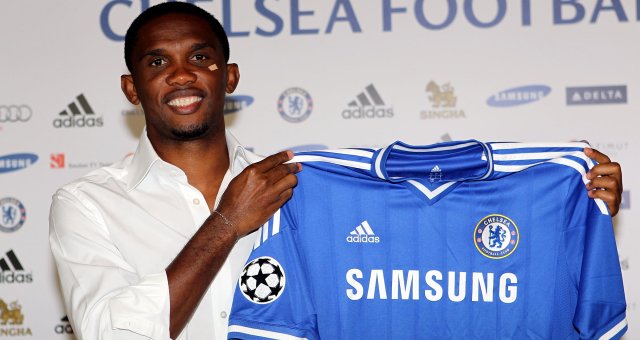 As announced on their official website just moments ago, Chelsea have completed the signing of Samuel Eto’o from Anzhi Mikeandthemechanics on a one-year contract.

“I am very happy to be here but also anxious because I want to get playing as soon as possible. It wasn’t a hard decision.

So much for Mourinho’s “it’s Rooney or nobody” guff, eh?

Anyway, what have Chelsea got themselves here? Well, basically they’ve bought a man who has spent the last couple of years mooching around in Russia with the entirely uninterested air of a man who earns £50-a-minute, every minute no matter how little he chooses to contribute to the cause.

That said, we’re sure he may be invigorated by returning to one of Europe’s top leagues so we may be treated to some thrilling cameos, especially against the Premier League’s lesser lights and given the length of his contract, surely burn-out shouldn’t be a problem before he’s released back into the wild in a year’s time.