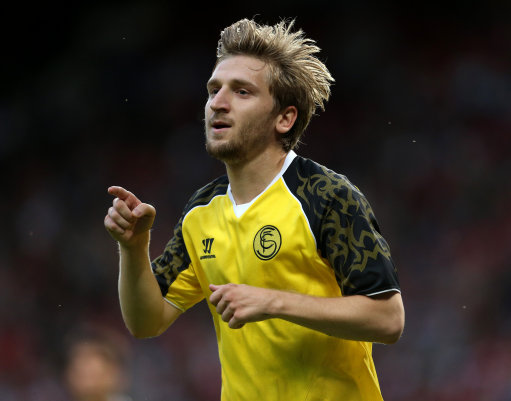 According to Bild, a group of enterprising Sevilla fans have started a campaign to shack Marko Marin up with a Spanish wife over the course of the next eight months in the hope that it will convince the jinky German winger to make his loan move from Chelsea permanent.

Marin joined Sevilla on a year-long deal earlier in the summer and has since put in a series of impressive shifts, scoring on his debut in Rio Ferdinand’s testimonial before hitting another two in Los Rojiblancos’ Europa League qualifier against Slask Wroclaw.

Therefore supporters are hoping that, by settling down with a local girl, Marin will extend his stay in the Andalusian city – and they’re confident of success too, what with current Sevilla captain Ivan Rakitic marrying his Spanish fiance back in April and subsequently knocking back several lucrative offers to move abroad this summer.

Personally, we’d buy poor Marko a new shirt (seriously, look at the state of that thing!) before he makes a move into the dating scene.