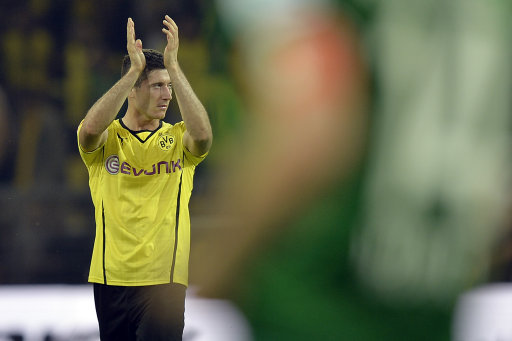 Borussia Dortmund striker Robert Lewandowski has confirmed that he is to join Bayern Munich at the end of the current season, also claiming that he will be signing a pre-contract agreement with Pep’s side in January just to nail his move down.

When asked directly by Sport1 reporters if he would be confirming his move to the Allianz Arena in January, Lewandowski replied: “Yes, because then I can officially sign the contract.”

Not bad as freebies go and you’ll have to fancy that he’ll go straight into the team ahead of Mario Mandzukic (with Claudio Pizarro being released back into the wild) upon his arrival. Mandzukic has confounded a lot of doubters with a steady stream of goals but, as good at leading the line as the slightly clumsy Croat is, Lewandowski is a superior striker in almost every regard.

You’d have thought, knowing the situation, that Dortmund would’ve tried to squeeze a bit of money out of Bayern for their prized striker by forcing through the move in January, but it seems that it just isn’t to be.

While we’re on the subject, we thought that players weren’t allowed to sign pre-contract deals with clubs in the same league, but maybe that’s just a Premier League ruling. Anyone out there any the wiser?