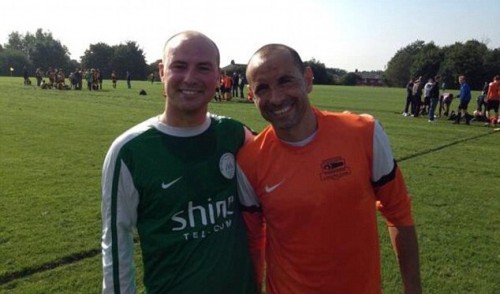 We’ve all been there: crawling into the carpark late, hungover and bloodshot for a Sunday League game only to be greeted with the news and subsequent pangs of dread that your opponents are fielding a ringer who used to play at a semi-pro level and that you’re going to be tasked with marking the tireless bastard for the next hour-and-a-half.

Well, spare a thought for Manchester Saturday Morning League side Spartak Bushes and specifically their centre-back Allan Cooke (that’s him above), who arrived at Armadale Road Playing Fields on Saturday only to be told by his manager that he would be marking former Manchester City winger Martin Petrov that morning.

Yep, you read that correctly. Having been released by Espanyol in the summer and currently in limbo while waiting to complete a move back to his homeland with CSKA Sofia, the 34-year-old former Bulgarian international has taken a step into the unconventional by signing for Manchester-based amateur side Chorlton Torpedo on a short-term, voluntary deal in a bid to keep his fitness levels from dwindling to nowt.

“I kept looking over because he played centre-forward and thinking ‘that’s Martin Petrov’. It was surreal.

“I’ve been telling all my mates and everyone at work and they don’t believe me until I show them the picture.”

Not that Petrov put in a particularly impressive shift mind you, with Spartak defender Lee McKay relaying his match report to the MEN after the game:

“To be honest for the majority of the game you wouldn’t be aware he was an international Premier League player. He didn’t stand out.

“But from the 80th minute to the 90th he came into his own because he had that little bit of extra stamina when the rest of us were on our knees.

“He got the winner late on when he rounded our goalkeeper and tapped it in.”

So many questions: why won’t CSKA Sofia let Petrov train with them until the move is completed? Why Chorlton Torpedo? Why is it that every club in the Manchester Saturday League have Russian names? How many years to go until Petrov’s age actually catches up with his hairline?