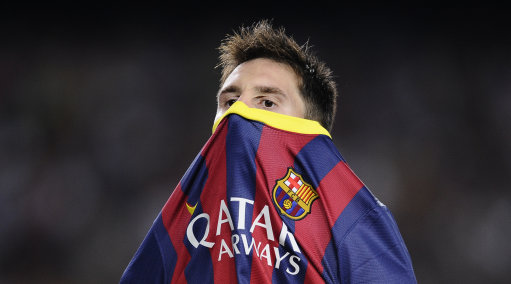 Messi can smell the bullscheisse

According to a report in Mundo Deportivo and claims being made by the entirely untrustworthy “FIFA agent” and professional sh*t-stirrer Francois Gallardo, Adidas both tried and failed to bank roll two huge bids for Lionel Messi in order to wrestle him from Barcelona’s clutches and into the hands of one of their marquee clubs, Bayern Munich and Chelsea, over the summer.

Appearing on Punta Pelota, Gallardo claimed that Adidas are not keen to have their prized asset turning out in Barca’s Nike kit every weekend and were willing to stump up half of the €250million it would take to trigger Messi’s release clause at the Camp Nou in order to being him to one of Europe’s elite, Adidas-sponsored clubs.

Said Gallardo (our translation may be a little wobbly here): “The sports brand put up €125 million, half of [Messi’s] clause. The other half was to be put up by a club and three were ready [to comply]. One of them was the Bayern and they’ll probably (try) again next June.”

Gallardo called out Bayern by name as being implicit in the deal, while also mentioning that a second and third Adidas-backed club also launched similarly huge bids for Messi. We’re assuming we can probably rule out Real Madrid so that leaves Chelsea by our reckoning. The third club? AC Milan are virtually penniless, so it must be Forest.

Anyway, he also claimed that Bayern’s bid made the most headway, with the Bundesliga club offering Messi a gargantuan €20million-a-year salary and the option to retain 100% of his image rights, though the bid was knocked back when the Argentinian star publicly stated he was happy at Barca.

Here’s the footage of Gallardo’s Punta Pelota appearance. It’s in Spanish, though it is ‘CC’-able…