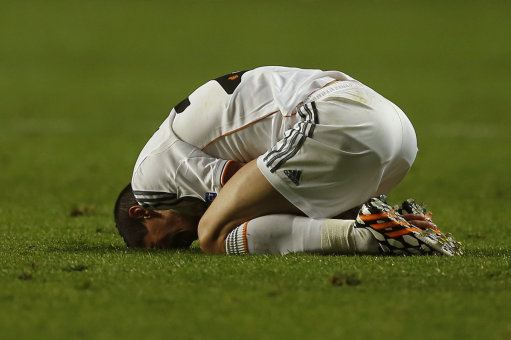 “Angel, I’ve got a Daniel Levy on the phone for you here…”

Angel Di Maria has admitted that he was “hurt” by being linked to Tottenham last summer having been mooted as a potential make-weight in Real Madrid’s colossal deal for Gareth Bale.

“It hurts when you’re always doing your best for your club and then you hear that you might be going to Tottenham.”

There’s one for you Arsenal fans to scoff mercilessly about from now until the end of time.

“I spoke with [Ancelotti] last summer. I wanted to stay and he wanted me to stay as well. He told me that he counted on me and it was up to me from then on.

“I have grown a lot under Ancelotti. He got the best out of me. Things have gone well and I made the right decision to stay.”

Given that he’s got the same bone density as a Weetabix, we imagine that there’s an awful lot of things that hurt Angel Di Maria: light summer breezes, the nearby flapping of a butterfly’s wings, Eskimo kisses, etc, etc.