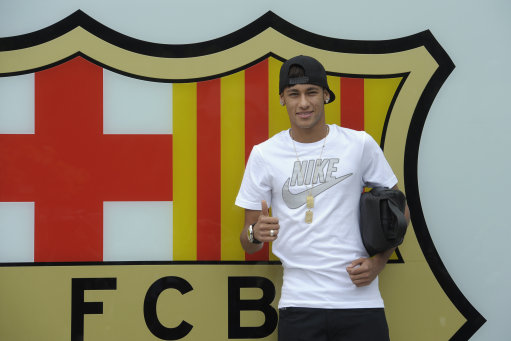 Thumbs-up if your old man’s a grubby little git!

Speaking in an interview with ESPN Brazil, Ribeiro, who left his post at Santos several months ago due to ill health, said:

“Neymar’s father charged off everything. He never paid for a coffee. I paid for all 200 coffees he drank with me. That also includes a plane to take him to Florianapolis to see the national team.

“There was no lack of money. He had [Andre] Cury with him, a Barcelona advisor, who spent almost the same as Neymar Snr.

“Neymar’s father is a liar, he’s only thinking about the money.

“To give you an idea, in the last contracts, he demanded a clause in which the club should pay him for first class tickets and two in business class for his advisors when there was an away game.

“The same for the national team or the Paulista tournament. A man with the money he has – he earned €1million a month.

“He had a 70-foot yacht and two houses on the coast of Sao Paulo. He even put up walls so his son could have parties without his mother’s knowledge.

“I’m disappointed. He is a two-faced liar.

“I thought Neymar’s father was my friend, but today, if I saw him in front on my car, I might step on the accelerator.”