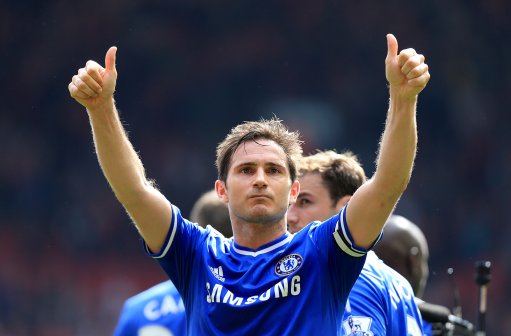 And lo, all things must pass.

Part of the Premier League furniture for what seems like a lifetime, Frank Lampard is to leave Chelsea after 13 years at Stamford Bridge having reportedly agreed a two-year contract with New York FC – the new MLS franchise part-backed by Manchester City.

According to several of the big papers, Lampard, now 35, left the England party in London to travel up to City’s Carrington training complex this afternoon to complete a medical (alongside fellow imminent NYCFC signing David Villa) under the supervision of NYCFC head coach Jason Kreis.

Lampard was free to talk with interested parties after his Chelsea contract dwindled to nothing last week, with the Mirror reporting that he has taken a significant pay cut to move to the MLS – though a generous bonus structure may well bump his basic wage up to somewhere approaching the £150,000-a-week he was on at The Blues.

Wow. Feels like the end of an era, no? The man was synonymous with the Premier League, and one look at his vital statistics suggests why.

Lampard also leaves Chelsea as their all-time record scorer with 211 goals in 646 appearances, being the only midfielder to have scored over 150 Premier League goals – and, of course, he did some fine work as a young’n for West Ham before that too.

So long Frank, you magnificent, corpulent beast. You shall be missed!

(Tip o’ the hat for @OptaJoe for the stats)