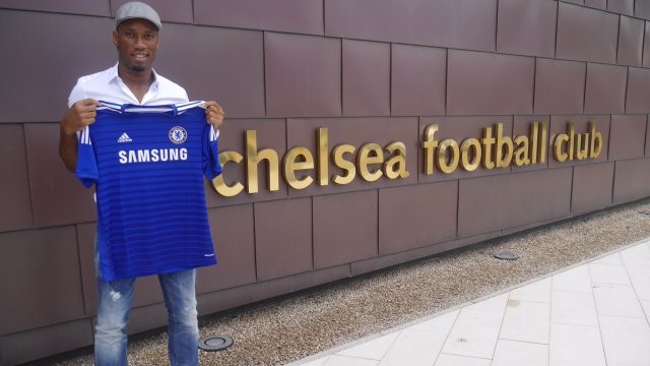 That famous spot-kick against Bayern Munich which won Chelsea the 2012 Champions League will no long be Dider Drogba’s final kick of the ball for the Blues after the Ivorian striker signed a new one-year deal with the west Londoners.

Moving from Galatasaray where he enjoyed an impressive spell, Drogba said:

“It was an easy decision – I couldn’t turn down the opportunity to work with Jose again. Everyone knows the special relationship I have with this club and it has always felt like home to me.”

“My desire to win is still the same and I look forward to the opportunity to help this team. I am excited for this next chapter of my career.”

Teaming up once again with Jose Mourinho, the 36-year-old Drogba, who bagged 157 goals for the Blues, will probably be used mainly as back-up for Diego Costa while it is likely that the African superstar will ultimately move into a coaching role at Stamford Bridge.

With Cesc Fabregas, Filipe Luís, Costa and Drogba all joining the Blues this summer and Thibaut Courtois returning from his loan spell with Atletico Madrid, Chelsea now look like a side with enough quality to win the Premier League and challenge for the Champions League.