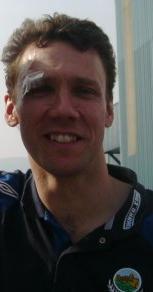 If you thought Fat Frank and co had it tough as their luxury coach was hit by a brick last night, spare a thought for Linfield captain Noel Bailie. As part of Pies’ plans for world domination I was in Northern Ireland at the weekend and saw Linfield’s title-deciding derby match against Glentoran.
Having all but mathematically helped his side win the league, Bailie was hit just above the eye by a rock thrown by Glentoran fans gathered around the tunnel as he left the pitch. Despite a nasty cut, the skipper was pretty laidback about the incident. He said: “It was a fair size of stone!” They are made of tougher stuff than the pampered Premiership boys! [Rob Parker]