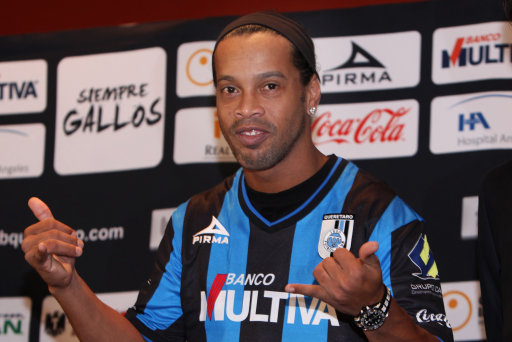 After snubbing Basingstoke FC’s recent attempts to entice him to the Vanarama Conference South, Ronaldinho joined Mexican club Queretaro last Friday – signing a two-year deal at the Liga MX side.

After being officially unveiled as a Queretaro player on Friday, many Mexican journalists and sports analysts have been quick to remind fans of the Brazilian World Cup-winners infamous “party boy” lifestyle (whatever could they mean?) and Ronaldinho himself has done little to dissuade any concerns that he’s merely in town for a two-year-long knees-up.

As quoted by MARCA, Ronaldinho told Queretaro fans at his unveiling:

“I’ve always lived in the same way and with every team I’ve been a champion.

“I look forward to doing the same here and continue winning titles and girls.”

Olé! This could be glorious.