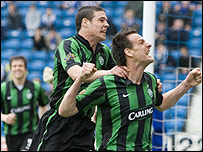 Congrats to Celtic, who wrapped up the SPL title today, but come on, there are teams in League One that could run Celtic closer than Rangers and co. The SPL is a joke league right now.
It was bad enough when Rangers and Celtic took turns to win it, but now Celtic are in a class of one. That’s not Gordon Strachan’s fault (he’s done a very good job), but it does Scottish football no good at all to have such an uncompetitive Premier League. I don’t know what the solution is, but it’s a shame that proud clubs like Aberdeen, Hearts & Hibs (not to mention Rangers) can’t put up a better challenge.