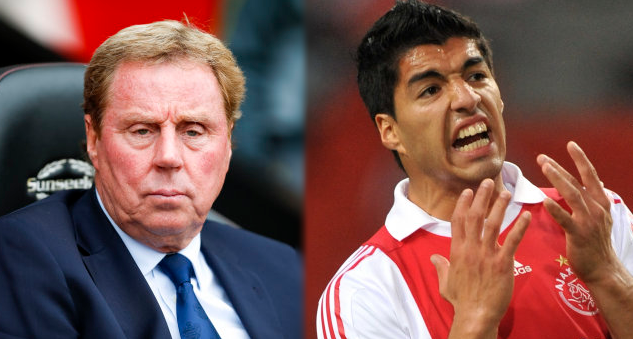 In a fairly transparent effort to deflect attention away from the expensively miserable job he’s doing at QPR at the moment, Harry Redknapp has farted out a new book this week which is currently in the process of being serialised in the Daily Mail.

Ever the self-serving, wobble-faced revisionist, today’s tale sees ‘Arry patting himself on the back once again, recounting the time he nearly (read: not nearly at all) signed Luis Suarez for Tottenham from Ajax in 2011 before big, nasty Liverpool Co. muscled in, threw their countless millions at the situation and simply outspent his humble little North London operation in order to get their man.

“Despite all that has happened in his career since, one of the biggest regrets of my life in management is not taking Luis Suarez to Tottenham when we had the chance.

“Yet all of our scouts’ reports said that at Ajax he played wide off a striker, whereas we were looking for a proper front man.

“Just when I was on the verge of taking the plunge, the price went up.

“In the end he was sold for £22.8million to Liverpool. We wouldn’t have paid that.”

Ploughing an almost knackered furrow, Redknapp also goes on to regale us with the time he “almost” signed Patrick Vieira for Spurs too.

Stop us if you think you’ve heard this one before:

“Vieira was a different type of midfield player and one every club would like to take now. He almost came to me at Tottenham from Inter Milan.

“I thought it was an incredible decision by him, after he’d been such a hero at Arsenal.

“I met him at his house in Hampstead and he had no fear about what people would think or what reception he would get.

“He had enough confidence in his ability to just brush it away.”

This is where the story takes a turn for the familiar…again, with Redknapp continuing:

“In the end, his circumstances changed and he decided to stay in Italy.

“By the time he did become available — the following January — our needs had changed and Manchester City snapped him up.”

Man City, eh? Another case of one of football’s faceless conglomerates ruthlessly sweeping in to capitalise on Honest ‘Arry’s salt-of-the-Earth groundwork.

How could he possibly compete?

Not that he goes on about it.