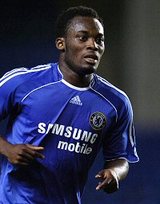 Michael Essien was arrested for drink-driving as he left a nightclub at 5am yesterday. The Chelsea midfielder/defender/goalie/physio etc. was driving his black Range Rover when he was stopped by police. Essien was breathalysed on the spot and nicked when the result proved positive. He was held for several hours then freed on bail at 10am. He must report back to police in July.
According to the Current Bun:
‘Essienâ€¦ hit the town on Sunday night after playing in Chelseaâ€™s 0-0 draw at Newcastle. Essien flew back to London with the squad, but did NOT join team-mates at the glitzy PFA Player of the Year awards.
Instead he went clubbing with pals in Peckham, South London, ending up at the Prince of Wales pub for an R&B night.
He left just before 5am yesterday with two men and two women in his Range Rover with blacked-out windows.’
Naughty naughty Michael. Jose will not be pleased, even though Essien is suspended for Chelsea’s CL semi final against Liverpool on Wednesday.