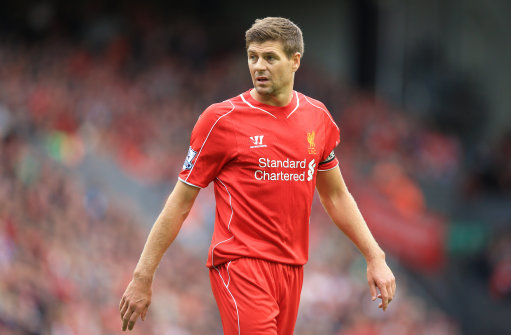 Other than that mid-2000s wobble when he briefly flirted with joining Chelsea only to be sent death threats from his adoring public, Steven Gerrard has stuck by Liverpool through thick and thin his entire career to date having first joined the club at the age of eight.

While his powers are definitely on the wane, it’s nigh on impossible to imagine the veteran one-club midfielder plying his somewhat diminished trade anywhere else – though it would appear that he’s beginning to waver just slightly.

In a wide-ranging natter with the Liverpool Echo, the thorny issue of a new Liverpool contract was broached.

Gerrard’s current Liverpool contract expires next May but the 34-year-old skipper is adamant he will play on next season despite having not yet been offered an extension to his deal at Anfield – meaning he will actually able to sign a pre-contract agreement with another club in just two months’ time.

“I’m only contracted until May. As it stands, I’m here until the end of the season and want to make the most of it,” said Gerrard.

“I won’t be retiring this summer. I will play beyond this season.

“We will have to wait and see if that’s at Liverpool or somewhere else. That’s Liverpool’s decision. If they don’t come then I will see what’s out there.”

“GIVE ME A CONTRACT EXTENSION YOU SET OF MASSIVE B*ST*RDS!!!”