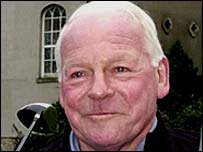 Wigan chairman Dave Whelan says he may sue West Ham United in the wake of the Tevezcherano incident. The Hammers were fined Â£5.5m but not deducted points after being accused of acting improperly over the transfers.
‘This is a very serious offence West Ham committed,’ said Whelan, whose Wigan team may yet be relegated below West Ham. ‘They broke the law, told blatant lies and should have got a 10-point penaltyâ€¦ If we can sue West Ham or the Premier League, I am sure that will happen.’
I can totally see where Whelan is coming from. If Wigan go out of the Premiership, they will lose out on far more than Â£5.5m, and they haven’t even done anything wrong – unless you count not having a particularly good season as wrongdoing. I’d imagine Fulham chairman Mo Al-Fayed feels the same way right now. [Via BBC]